Just arrived home from Earls Court and the 2011 Pulse show. Busy, busy, busy as usual, so much so in fact that we ran out of business fliers to give to potential customers...really encouraging given the current economic climate. It was good to catch up with old friends and customers...I'm happy to say many are both :) and we will be in touch with anyone who didn't make it this year to see if you would like to buy into this years collection. 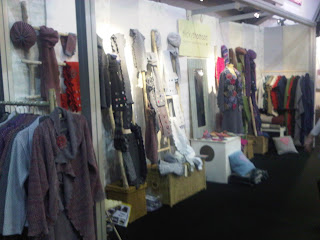 Lots of new styles this year and particular favourites were the new 'Soft Boucle' scarves and the 'Little Squares' jackets together will the ever popular 'Curly Contrast scarf, Floaty Coat and the Classic Cape. The happy mistake of the 'Flat' Wiggle Edge scarf has caused quite a stir...It was supposed to be wiggly as usual but for some reason has arrived in the office with rather chic straight edging and ended up as one of a best sellers this show...sometimes things just go your way:) 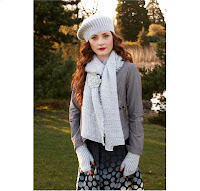 My faithful assistant 'Doris' was earning her keep this year by attracting customers. She was decked out in a rather eye-catching little number... 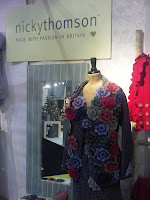 Mary Portas (Mary Queen of Shops) was spotted taking and interest before sweeping off to be glamorous somewhere...Her usual 'Mary's Comet' entourage was a little smaller this year. I hope this doesn't mean she doesn't have a new series or that the plan to help the High Street recover is not going well.